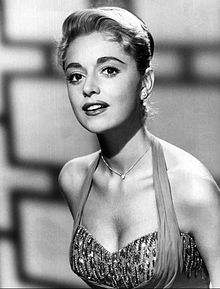 Anna Maria Alberghetti is a consummate performer. Her pure, wondrous sound has been heralded in America since her Carnegie Hall Debut at the age of 13. Her appearances on concert stages in a dazzling one-woman show cause her to be a sought after artist in both cabaret and with the world’s finest symphony orchestras. Her talents as an actress have captured the imaginations and interest of audiences everywhere and earned her Broadway’s coveted Antoinette Perry (Tony) Award for Best Actress In a Musical for the now classic “Carnival.” Prior to "Friends and Family," Anna Maria Alberghetti filmed “The Whole Shebang” with Stanley Tucci, Bridget Fonda, Giancarlo Gianinni, and Talia Shire. Her other feature films include co-starring roles in “Here Comes The Groom” with Bing Crosby, “Cinderfella” with Jerry Lewis, “10,000 Bedrooms” with Dean Martin, “The Stars Are Shining” with Rosemary Clooney, “The Last Command” with Sterling Hayden, and “The Medium” with the Metropolitan Opera’s great Lauritz Melchoir. Anna was born in Pesaro, Italy and as the daughter of a concertmaster father and a pianist mother, she began singing professionally at the age of six with a 100 piece orchestra on the Isle of Rhodes. “I cannot remember a time when music was not part of my life,” Anna Maria recalls today. “My father sang with a number of famous opera companies, including La Scala and he was concertmaster for the Rome Opera Company,” she explains. Her father was also her only vocal instructor. The tragedy of World War II forced the Alberghettis from their homeland and after a tour of Europe, Anna’s parents brought her to America where she debuted at Carnegie Hall. The New York Times marveled at the child’s extraordinary talent and “some of the purest, loveliest sounds that have ever been heard.” Success with the New York Philharmonic and other distinguished symphonies followed, paving the way for a career as soloist with outstanding orchestras that still flourish today. Ed Sullivan introduced Anna Maria to television audiences and the public has remained enchanted with her ever since. She appeared with Sullivan a record 53 times. As she matured, the beautiful girl with the angelic voice made her mark in every area of entertainment. In addition to her Tony winning performance in “Carnival,” Anna Maria has also given illustrious performances in “West Side Story,” “The Sound of Music,” “Cabaret,” “Camelot,” “Fanny,” “Most Happy Fella,” “The Boyfriend,” “The Student Prince,” “Side By Sondheim,” and recently has toured in the Kopit-Yeston production of “Phantom.” Her recording career has included performances for Capitol Records, Columbia Records, Mercury Records and MGM Records. In 1964, Anna married director/producer, Claudio Guzman. During the ten-year marriage she gave birth to two daughters, Alexandra and Pilar, and her focus shifted from her career to the demands of parenthood. Today, as her daughters have begun their own careers, Anna is again pursuing the profession she knows and loves. “When you’ve been fortunate enough to have a career as a child, there are great advantages and great responsibilities. I accomplished so many things during the early days of my career that I never felt there was sacrifice in being home with my children. Rather, there was joy,” she explains. Returning to the theatre, as well as to the concert and lecture stage today, she is warmed by the affection of a public, which has maintained an interest in her talent and beauty since childhood. “One great advantage of working all your life is that people are wonderful,” she says. “They remember and enjoy from so many points of view. Some people have attended a concert, others were touched by a lecture or one of my films has entertained them. I gained an entirely new audience during the years I was associated with the Good Seasons television commercials. It’s satisfying to feel special and familiar to so many people.”